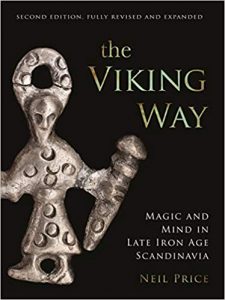 The Viking Way by Neil Price (who is currently Distinguished Professor of Archaeology at the University of Uppsala, Sweden, having previously held the Sixth Century Chair in Archaeology at the University of Aberdeen) is one of the most insightful, original, and compelling books ever published on the Vikings. It’s essential for understanding the intellectual, spiritual, and moral universe within which the Vikings lived. And it’s been one of the most important influences on my own writing on the Vikings, including this site and my book The Viking Spirit.

Since its original publication in 2002 (with the subtitle Religion and War in Late Iron Age Scandinavia), The Viking Way has acquired a significant cult following among people who are interested in the Vikings and Norse mythology. Perplexingly, however, despite the book’s well-deserved fame, it’s long been out of print and nearly impossible to find. Because of that, it’s taken on something of a legendary status among Norse enthusiasts, as if it were a long-lost city or folkloric beast – something they’ve heard others talk about in almost reverential tones, but have never actually seen for themselves.

Ever since I began this site back in 2012, I’ve been encouraging people to get their hands on a copy of The Viking Way if they have any kind of opportunity to do so. It’s been high on my list of The 10 Best Advanced Norse Mythology Books ever since the list was published.

Thus, I was thrilled when the publisher of this second edition, Casemate Academic, notified me that they were going to publish a new edition of the book, and then graciously provided me with an advance copy.

The Viking Way is centered on the Vikings’ practice of magic and the role that it occupied in their culture. The book goes into considerable detail about the sources for our current knowledge of Norse magic, the previous scholarly research on Norse magic, the role of magic in Norse mythology, the various types of magic the Vikings recognized, the various types of practitioners of magic in Viking society, how magic was performed, what kinds of material implements were used in those performances, the relation of magic to the Vikings’ daily lives, and the many uses to which the Vikings put their magical practices.

To round out the picture, Price includes lengthy comparisons with the magical beliefs and practices of related societies, especially the Sámi and other far-northern Eurasian peoples who also had highly-developed traditions of magic and shamanism. This helps to contextualize the Vikings’ own beliefs and practices related to magic, as well as to suggest plausible interpretations for some aspects of Norse magic that are otherwise difficult to understand.

But while magic is the book’s starting point, it’s by no means its ending point; instead, the exploration of magic serves as a point of entry into the Vikings’ worldview as a whole, which seems to be Price’s overarching interest and concern. This book remains the best discussion of the Norse worldview to date. Along the way, it delves deeply into the Vikings’ views on, and practices of, several other areas of life besides just magic, such as war, death, gender, and the unseen spiritual nature of the self and of the world.

Through such discussions, Price patiently and carefully forms an intricate picture of how these many spheres of life related to each other in the Viking mind, a web of connections that culminates in a rich and at times shocking big picture of how the world looked when seen through Viking eyes. It’s a world that could hardly be more different from our own – philosophically, morally, and experientially – but which we can nevertheless recognize as quintessentially human.

The new material – which adds up to a considerable 35,000 words – largely consists of overviews of new developments in academic work on the Vikings that have taken place since the publication of the first edition in 2002 and which are relevant to the book’s arguments. Price also incorporates some of the work he’s done since 2002, while leaving the first edition’s basic structural and intellectual framework more or less intact.

Price states that he doesn’t entirely agree with that framework anymore, but wanted to preserve it so that the second edition could fulfill one of its central missions: making the first edition accessible again. If he had made too many changes to the book’s theoretical framing and the arguments that support it, it would no longer be the same book. I, for one, am glad that he made the choice that he did in this regard, given how much of a classic the first edition of the work has become.

Copious illustrations, photographs, and tables help to add vividness and specificity to the material.

For anyone who’s interested in the ancient Norse religion and doesn’t mind serious scholarly prose, The Viking Way is indispensable reading from a true master of the field. You can find it on Amazon here. (For now, it’s available to pre-order, and is slated to be released on July 19, 2019.)